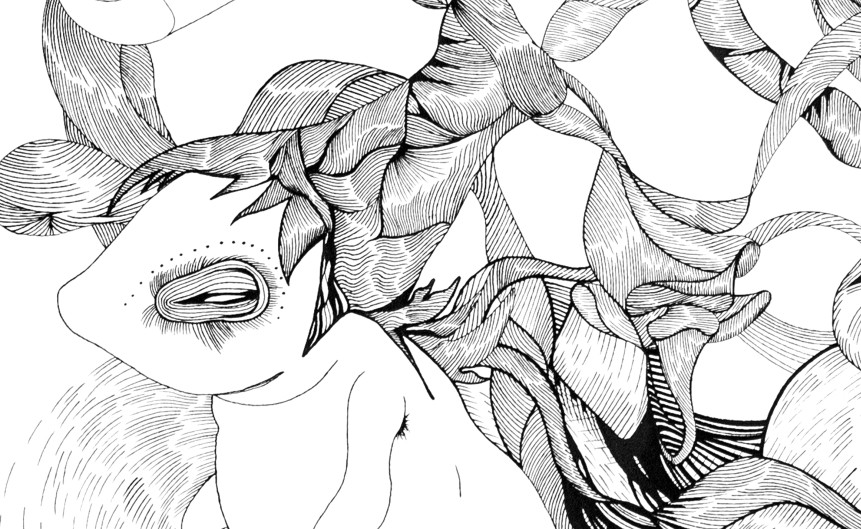 Vise versa (originally derives from a Latin word that means “on the contrary”)  is an upside down Globe... This is a Realm of flip-floppers and offspring of Reason’s gambling... It is the funny and slightly daffy  wrong side of the reality, which strongly resembles the Wonderland, because that was also inhabited by poofy creatures, whose feelings and beliefs are beyond conditional human logic. One of the aforementioned creatures was Keelcoushe, a personage from a mid-90th performance by Ali Hasanov. The personage used to wear a black raincoat and was desperately keen to extricate himself from the bondage of the threads, demonstrating thereby a certain likeness to the invincible superheroes.  The author of the personage paved the way for perform activity in Azerbaijan. Present-day Ali Hasanov is not just an experimenting artist, a performance pioneer in Azerbaijan and the author and “PG large used project” meme wrangler, but also unusual and nonconformist video art pieces director that works in the same style the old-fashioned Ali did.

Moreover, he has been exploring such media as graphics and painting and had numerous exhibitions in Azerbaijan, Russia, Georgia, France, Norway, Greece, and Italy, etc. for 18 years. He represented Azerbaijan at 52nd Venice Biennial. And his anti-globalist installation “The Masters” decorated 55th Venice Biennial pavilion within the framework of YARAT-implemented “Love Me, Love Me Not” international project in spring 2013. At present, Ali Hasanov is mainly based in two cities-Baku and Moscow. The painter strives to convey the most essential stuff through language of cinema and music or just transforms his own body into artwork as a result of complicated and occasionally dangerous performances. Only his style survives with no transformations at all- the same daring, fine and evocative style that is fully capable to enchant even the most experienced audience.

Vice-versa exposition simply shares one aspect of Ali Hasanov’s art. Black-and-white array of 10 graphic art pieces falls into easel graphic works and conceptual painting. The emphasized simplicity of the artworks lies in disagreement with presentation complexity and the most careful draughtsmanship. The author states creative process is like meditation, in his judgment.

The artist purposefully leaves inane space surrounding his painting personages blank and applies unconditional configurations, breaking thereby universally agreed design rules and invoking desire of getting projected with painting characters. The painting design looks like collapsed into multitude of constituents. Interestingly, this approach is only attributable to the above-stated series of art pieces and strongly confronts with design of the works the author used to create. It is worth stating “Valentia” series, for example, where drawings are struggling to trespass their confinement areas and the action itself occurs beyond the frameworks of the paintings.

All painting personages are richly endowed by their creator with unique character traits and specific poetry. They strongly resemble strip cartoon heroes, are multifaced and sarcastic, naïve and ironical at the same time. They possess a capability to produce a total mess-up in our mind. Every personage recalls in our memory an image of tenuous thread that runs out overshadowing insight and illusions of the audience and later on, scrolls entangling and blearing our eyes.