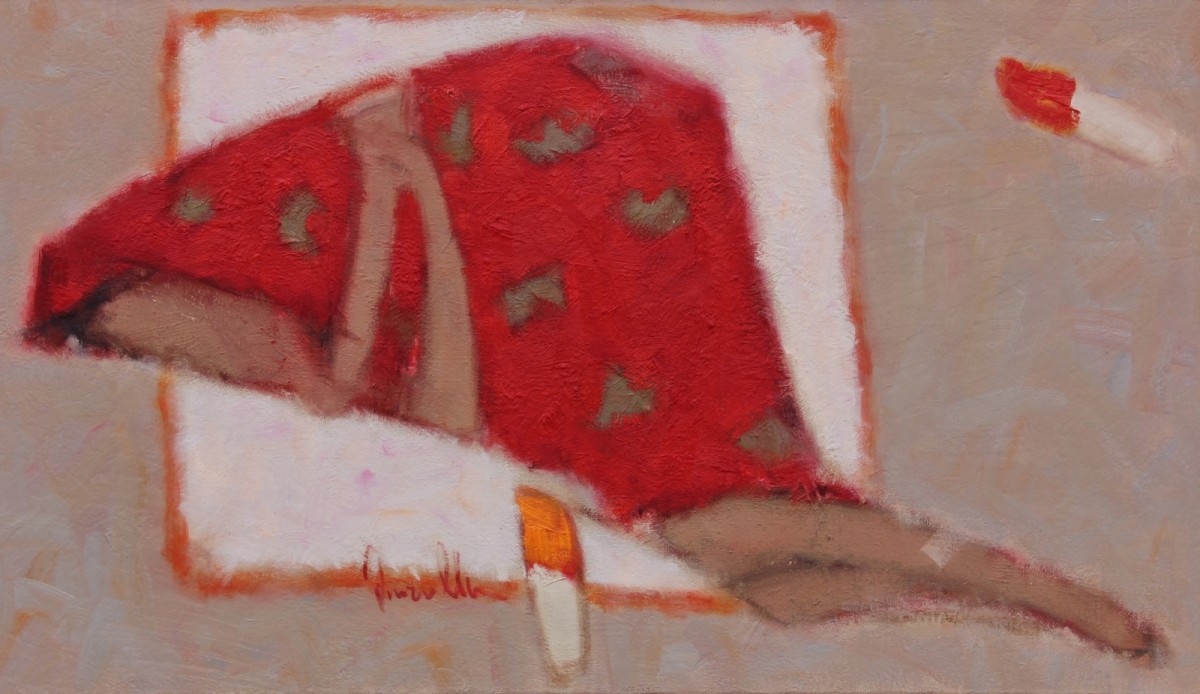 YAY Gallery is pleased to announce the opening of the “Bodily Landscapes“ group exhibition.

The human body and the landscape share the same course, both subjects have been analysed, reduced, taken apart and again assembled serving as artistic content material as well as for exploration of different techniques and styles throughout the history of art. For a long time, the male gaze dominated whilst the female body has been used as muse object, however, in recent development the female gaze paved its way equally. By the beginning of the 20th century Mondrian already developed a theory considering the artist as a non-binary being, connecting the female (material) element and the male (spiritual) element. During the same period of time many theorists and artists tried to carry out similar theories explaining female and male components of art, however, still relating to the bipolar gender identification. The exhibition shows landscapes, in which nature obtains human features and the human body gets objectified creating a perception that is detached from any gender identification dissolving into earthly forms and colours, vivid projection surfaces of internal states.

Amrulla Israfilov (b. 1962) an artist who works in direction of pure and abstract painting. As a master of colours, heuses semitones and tones, without giving to his figures any shadows. This element adds a feeling of two-dimensional image. By adding vivid and unexpected brush strokes to surface, artist emphasizes the most important moments.With expression of highlights of plain and ordinary life in his oeuvre, he denies the assumptions of narrative art.  It delivers emotions directly to the viewer. His figures reveal nature with the gestures, costumes and recognizable elements of occupation.

Aida Mahmudova (b.1982) is a contemporary movement representative, an artist who works with various medium, such as painting, sculpture, installation, photography and video. Aida Mahmudova’s canvases largely depict native landscapes that infiltrated with dreamy and nostalgic sentiments. Her pictorial researches often focused on the marginal corners of a rapidly modernizing country. Three-dimensional objects of different periods give allude to memories, time, architectural aesthetics, and imagination of universe and beauty of the world. Mahmudova currently experiments with the synthesis of material and form. Aida Mahmudova holds a bachelor degree in fine arts from Central Saint Martins, London. She has been exhibited widely including Leila Heller Gallery, New York; Louise Blouin Foundation, London; MAXXI Museum, Rome and 55th and 56th Venice Biennials.

Eldar Gurban (b. 1948) is one of the few artists representing the style of primitivism within the Azerbaijani art scene. Eldar Gurban started his artistic career in the 1970-s and has been widely exhibited in Azerbaijan as well as abroad. His style relates to French primitivism in visual expression, content wise it is linked to local environment and its particularities, it talks about beauty in different languages combining reality and dreams of his world. Gurban’s portraits depict mainly beautiful women of Azerbaijan. His style influenced many representatives of a younger generation. Eldar Gurban is Honored Artist of Azerbaijan, member of Artists Union of Azerbaijan.

Mir Nadir Zeynalov (b.1942) is considered to be one of the most significant artists in the post-soviet area of Azerbaijani art. His artistic career started in 1970s with soviet subject, however, in non-soviet artistic language representing the Absheron School. His visual practice is mainly separated into two fields consisting of a stylized figurative approach and abstraction based on color rhythm. The biggest contribution to the development of modern art, are his abstract paintings characterized by an expressive and emotional style. Furthermore his mixed media collages take a particular role in the artist’s practice. Mir Nadir Zeynalov developed a very wide range of topics, such as local folklore, values and heritage, beauty and labor, as well as philosophy. Mir Nadir Zeynalov is a People’s Asrtist of Azerbaijan, Honored artist of Azerbaijan USR.

Niyaz Najafov (b.1968) is an artist at the forefront of Azerbaijan’s contemporary art scene. Being a professional sportsman, Niyaz Najafov started his artistic career in 2003, experimenting with oil paint influenced by other self – taught artists. In his early paintings the artist highlights vices of society and individuals based on his own experience. This experience talks about fears and desires hidden inside. He discovers impressions with a satirical approach and a narrative manner; his works always show a readable line of story. Najafov style of painting is expressive and emotional using a dark palette majorly.

Entrance by invitations only