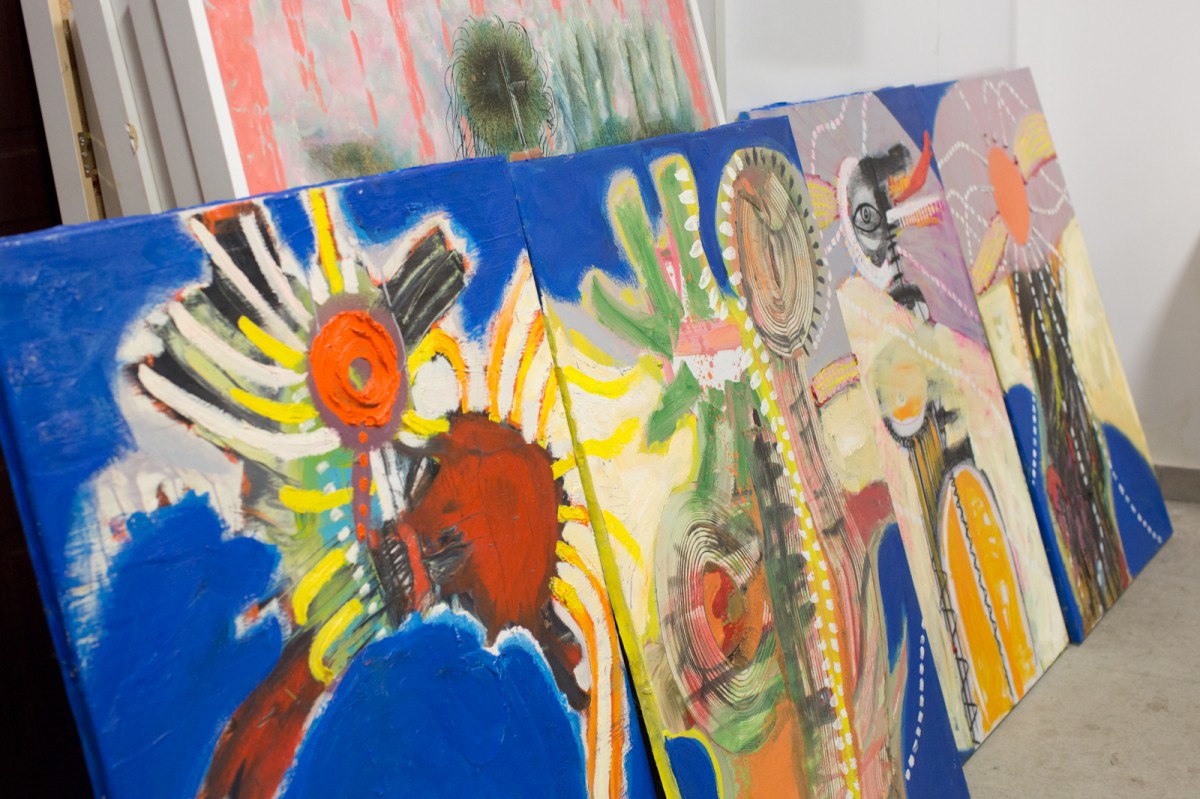 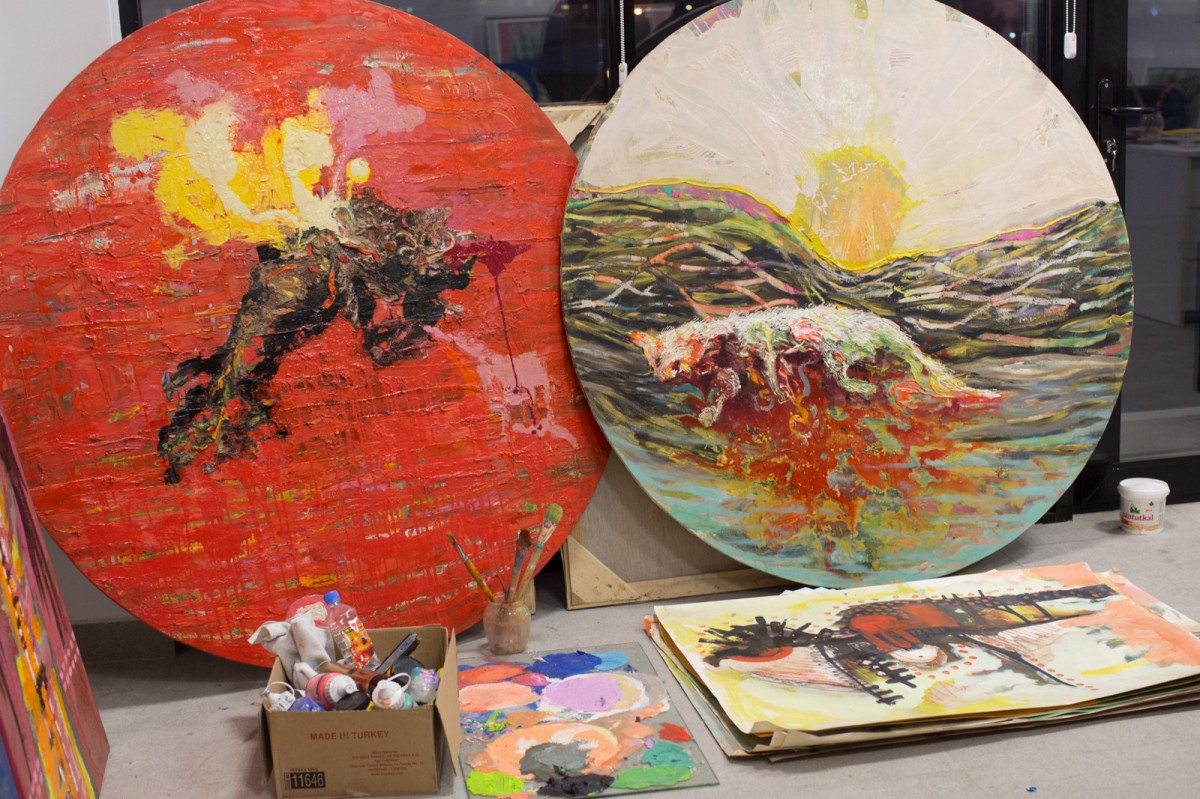 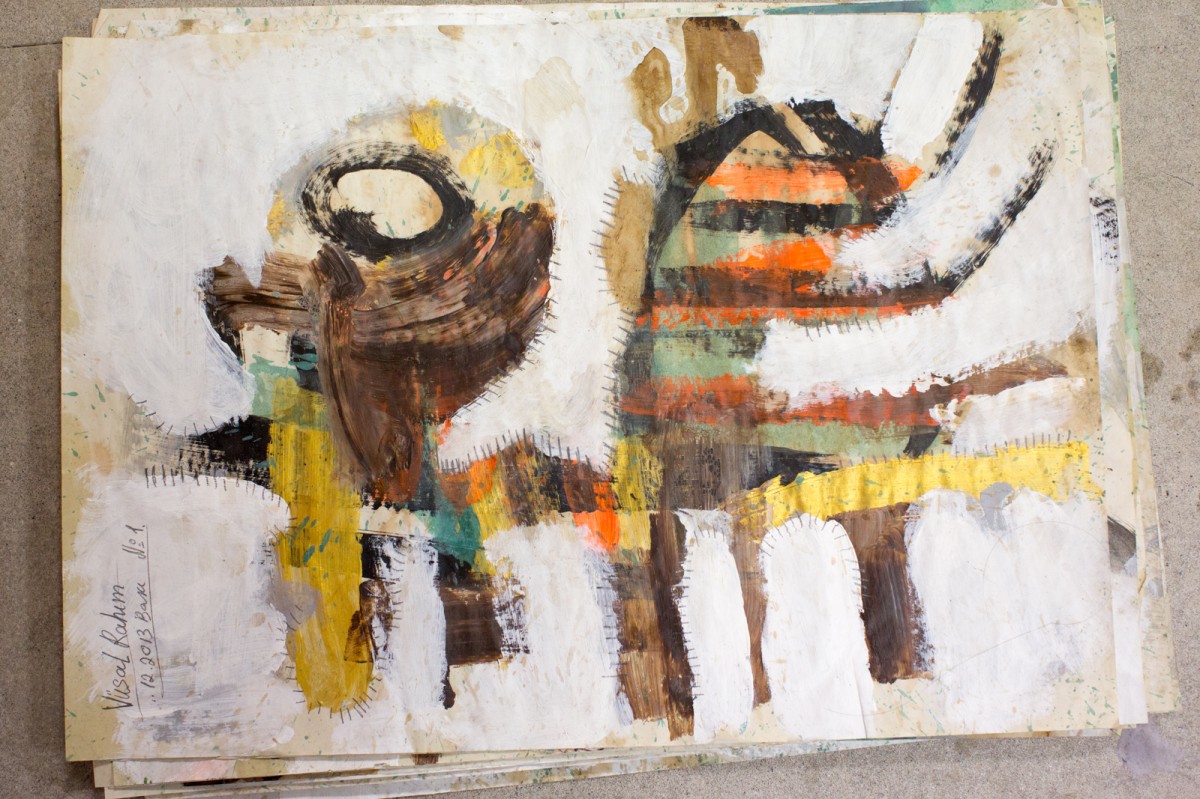 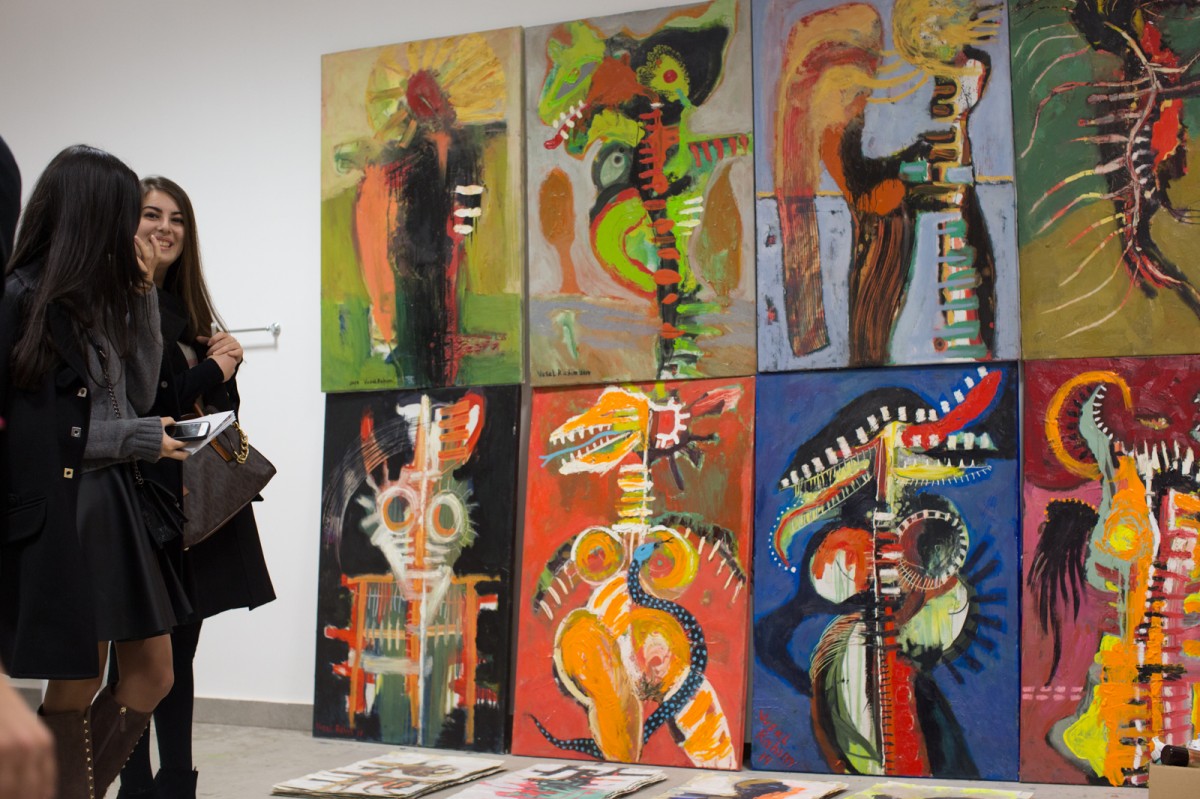 Duet is pleased to announce an exhibition featuring American artist Caitlin Aasen (Duet Gallery) and Azerbaijani artist Vusal Rahim (YAY Gallery). To mark the first time these two artists have been displayed together, this exhibition creates a dialogue between their two cultures through their approaches to abstract painting. The exhibition is co-curated by Daniel McGrath (Director of Duet Gallery in St. Louis, USA) and Lana Sokolova (Local Programmes Director, YARAT Contemporary Art Space, Baku, Azerbaijan).

Vusal Rahim is exhibiting a series of paintings that build on the highly personal style he has developed in previous work. Rahim breaks down the recognizable features of the human figure on each canvas into abstract forms, bringing them together with fluid, broad brush-strokes and a striking color palette. The dynamic sense of movement in the works gives them a frenetic energy which Rahim controls with patterning and careful compositions.

Caitlin Aasen’s paintings, exhibited alongside, provide a counterpoint to Rahim’s works. Her paper and canvas surfaces are veiled in stained rivulets, thin washes and expanses of faded color. As layer upon layer of washed-out color build to suggest seemingly natural but unrecognisable forms, her work evokes an absence. Whereas control and energy, order and dynamism are evident in Rahim’s work through the traces of the artist’s hand, Aasen’s work is mute, giving little away about its creator.

“I had the opportunity to meet Lana Sokolova when she was on a residency in St. Louis with CEC Arts Link last October. We discussed then the possibility of co-curating an exhibition at Duet. Lana chose Vusal Rahim’s work to be paired alongside Caitlin Aasen’s because she thought their abstract approach to painting created an interesting and thought-provoking pairing.”

“When I first saw Caitlin’s paintings, I remembered some abstract sketches I had seen at Vusal’s studio. I selected him to accompany Caitlin because there is a strong parallel of abstract distancing of reality in both artists’ works. Caitlin and Vusal both use bright and saturated colors and their paintings show an instinctive understanding of the emotive properties of color. As YARAT Contemporary Art Space is aiming to create dialogues between different cultures, this seems to be a good chance to move forward with our goals. Art creates a valuable opportunity to make connections between the young artists of Azerbaijan and the Unites States.”

Caitlin Aasen received her Bachelor of Fine Arts from the University of Missouri – St. Louis and is currently pursuing her Master of Fine Arts in Painting at Washington University in St. Louis. This is her first multiple-artist exhibition.

Daniel McGrath is an adjunct professor in the art department at Lindenwood University in St. Louis. In 2005, he received his Master of Arts from Kings College at the University of London. In 2000, he earned his Bachelor of Fine Arts from UCLA. McGrath is also co-director of Isolation Room/Gallery Kit in St. Louis and was co-curator of Sweetboy Projects in Los Angeles and has organized exhibitions in St. Louis, Los Angeles, Copenhagen and Oxford, UK. He is a contributing art writer for Art Papers, Art US, Sculpture and Site 95. He has exhibited his work at The Fabrikken, Copenhagen; Hunter College MFA Studios, New York; Office Space, Los Angeles; SweetboyProjects, Los Angeles; Pirate, Burford, UK; Good Citizen, St. Louis; PSTL, St. Louis; Hunt Gallery, St. Louis and The Luminary Center for the Arts, St. Louis. He lives and works between Oxford (United Kingdom) and St. Louis (Missouri, USA).

Lana Sokolova is Local Programs Director at YARAT Contemporary Art Space in Baku, Azerbaijan. She manages the creative development and delivery of local programs with a large outreach, drawing together a network of cultural institutions in both Europe and Asia to collaborate with YARAT on education initiatives, exhibitions and exchanges. Her projects focus on urban revival and cultural dialogue. In 2013, she organized the public art festival Participate. Themed around interaction, the festival placed the work of artists from Azerbaijan, the United Kingdom, Russia, USA, Georgia and the Netherlands at different sites around Baku.

Duet is an exhibition series and curatorial endeavor devoted to meaningful pairings between artists from St. Louis and a carefully chosen complimentary artist from another city, offering up both a comparison and contrast of the cultural landscape that influences each of the artist’s work. Located in Grand Center, the series includes artists that are working in a variety of media and exploring subjects unique to their geography. This curatorial project is underwritten by Ken and Nancy Kranzberg, whose support of local artists has been a sustained commitment for over twenty-five years, allowing artists valuable exposure to new audiences within and beyond the region.

Located in the heart of Baku’s Old City, YAY Gallery sits within a designated UNESCO world heritage site. The gallery was founded by YARAT, a non-profit contemporary art organisation, as part of their commitment to support the art infrastructure in Azerbaijan. The gallery is a social enterprise: YAY (meaning ‘share’ in Azerbaijani) shares all proceeds from sales of work between the artists and YARAT’s activities and programs. In addition to six exhibitions a year, the gallery has rapidly established a strong following for its program of talks and publications. Artists represented by YAY Gallery have gone on to take part in residencies and exhibitions internationally. Faig Ahmed was nominated for the prestigious Jameel Prize in 2013 and exhibited at the Victoria and Albert Museum in London. In June 2014, Nazrin Mammadova, Rashad Alakbarov and Farid Rasulov took part in Delfina Foundation’s respected residency in London.